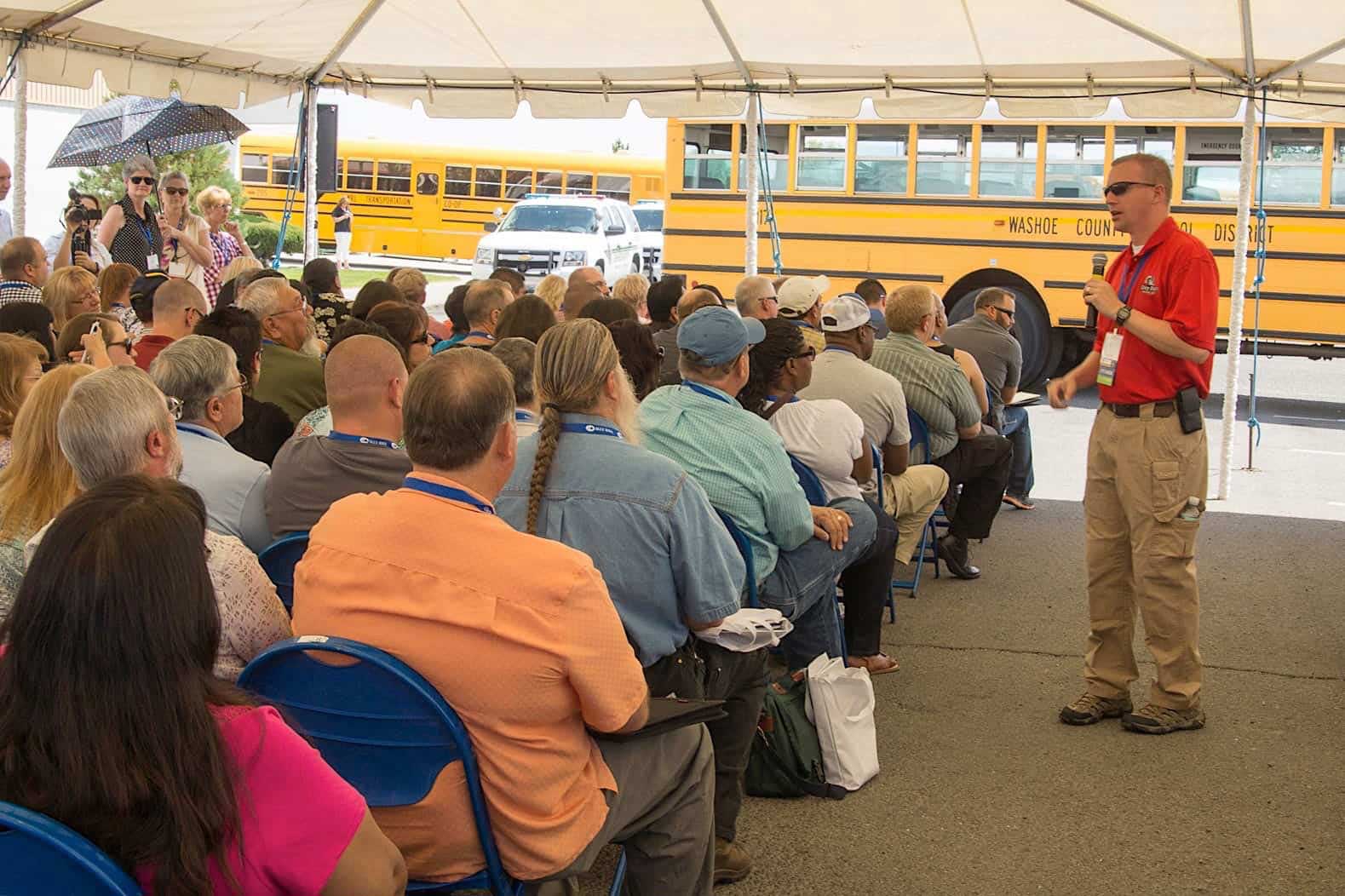 Late last year, Jack Mann received notification of a campus evacuation for Spring Independent School District (ISD) in Houston, Texas. It wasn’t the first time the director of transportation had to operationalize for such an incident. He’d previously dealt with reports of weapons on campus or a student on a school bus carrying something suspicious in their backpack.

Kicking into gear, Mann contacted dispatchers and route managers to line up 40 buses and drivers. The caravan began at one of the high school football stadiums — close enough to pick up the evacuating students but far enough away from the scene.

Elementary school teachers took their students to the field as if conducting a fire drill. Meawhile, the Harris County Sheriff’s Office and neighboring Klein Independent School District assisted in clearing the campus and used bomb-sniffing dogs to verify there was no threat.

Mann took into consideration what needed to be done, how many students and staff were on campus, and what students with special needs required accommodation.

“Every single driver we had, every mechanic, route managers, routers, administrators — we were all on,” Mann recalled.

Mann staged farther away using his handheld radio and cell phone to communicate with his team and administrators, functioning as a central command where all communications were funneled through the police chief or the officer handling the incident.

Fortunately, that incident turned out to be a false alarm. But the response remains the same.

Mann called staff, which work split shifts, back to resume normal afternoon routes. He explained that when drivers recognize a potential incident is afoot, they contact dispatch with a unique code deemed so odd “that when you hear it on the radio, it draws your attention. Dispatch automatically knows to pull GPS and contact the police. They work together to instruct the driver what to do to minimize the risk of escalation.”

In recent incidents, the bus drivers were close enough to the school to proceed there and meet the school resource officer and administrators. The student suspects were held on the bus and searched.

“In both times, they were veiled threats or somebody saying something they shouldn’t have said. There was no weapon on the bus,” Mann recalled.

Ongoing incident training in safety meetings and in-service training incorporates lessons learned and successful strategies. For example, drivers are advised not to confront the students or do anything to escalate the situation.

“We’ve also had our police department speak to our route managers to give them advice on how best to handle a situation like that so they can talk to their drivers about that,” Mann said.

Unlike other districts relying on outside municipal law enforcement, Spring ISD has its own licensed police force and fleet. The district serves a population of 33,600 students in a 56 square-mile area, with some 14,000 students transported via a bus fleet of 360.

Just as staff is trained, the district takes proactive approaches with students to prevent a student from bringing a weapon on a bus.

“Our students go through metal detectors here every day no matter what,” said Mann. “That in and of itself helps minimize some of the risks. We work with our bus drivers to build relationships with their kids.”

He referenced high-profile school shootings, such as the Columbine High School massacre in 1999, which resulted in 12 students and one teacher being shot, and the Sandy Hook Elementary School shooting that occurred in 2012, resulting in the murder of 26 students and staff members.

“We really stress to the students you need to say something,” he said. “The kids are pretty good about ratting each other out. Sometimes we’ll see something on social media and they’ll report it to us, which we then report to the police department. With the drivers, a kid will say something, and they then report it.”

Mann advised other transportation departments to work closely with campuses, central administration and law enforcement to come up with a plan ahead of time. Because Spring ISD is located in a hurricane zone, an emergency management plan already exists that utilizes some of the same structures, Mann explained.

“You need to basically know how many souls are at those campuses and be able to think clearly, which is the hardest part,” he added.

Meanwhile, Bret E. Brooks, the chief operating officer and senior consultant for Gray Ram Tactical, noted that the frequency and severity of violent attacks in and around school buses nationwide have increased since the informal reopening of schools following the COVID-19 pandemic.

Brooks noted one should never overlook the importance of recognizing — through formal training programs such as those offered by his company — the pre-incident indicators of violence, so school bus drivers can immediately implement de-escalation techniques in an effective manner.

Additionally, he said, drivers must be able to recognize the warning signs of someone with a concealed weapon. His organization trains individuals on those warning signs, which provides an opportunity to avoid a possible attack.

All mammals undergo a “freeze, flight, fight” response when presented with a potentially dangerous situation, noted Brooks, who is presenting a session at STN EXPO Indy on June 5 that discusses the warning signs of school bus security issues and how to de-escalate them.

“Too often, individuals get caught in the freeze step,” he added. “When they become frozen with fear or frozen with disbelief, they are unable to de-escalate the other person, let alone be able to physically protect themselves.

“Mental preparation drills help individuals move out of the freeze phase quicker to progress to the flight and, if necessary, the fight phases.”

However, Brooks said, not everyone in every situation can be de-escalated.

“It is critical that drivers know, understand, and practice methods of self-preservation, including the preservation of the students for whom they have a responsibility,” Brooks said. “Drivers should be able to physically fight back to defend themselves or the children if necessary if an escape is not possible.

“This is a terrible and very unfortunate outlook,” he continued. “Yet in today’s violent times, it is essential.”

A critical and often overlooked aspect of any violent attack is the issue of medical treatment after the attack has ended, said Brooks.

“There will be injuries, possibly life-threatening,” he added. “Drivers must know how to prevent the loss of life by use of appropriate medical intervention skills. Preventable causes of death following an attack must be understood. Drivers must take immediate medical action for these trauma events before an ambulance can arrive to help.”

This includes drivers having access to and know-how to use critical medical equipment such as tourniquets and chest seals. “After the attack is over, personnel must be able to keep the victim alive while the ambulance responds,” he added.

“On a day-to-day basis, they may be griping about this, that and the other thing, but when it has to do with the safety of the students they sense that urgency and jump right into it,” he concluded.